skip to main | skip to sidebar

Posted by Padre Steve at 5:52 AM No comments:

Don Bosco and the Youth of Surrey! 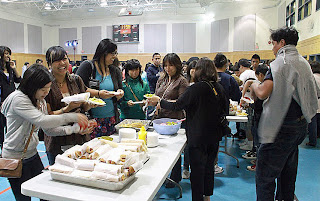 The following comes from the B.C. Catholic site:


Some 200 youth from parishes all over the Lower Mainland worshipped, sang hymns and songs, joined in study sessions and a talent show, listened to speakers, and joined in discussions in preparation for the visit of the relics of St. John Bosco Oct. 8 to 10.
They were all at the Don Bosco Youth Centre in Surrey Sept. 18 for a whole-day "Don Bosco Among Us" youth symposium. The day was capped by Holy Mass.
The sessions were led by Father Dave Sajdak, SDB, who performed "Soul Man" and wowed the audience with his singing and dancing abilities in the tradition of the founder, Don Bosco (Father Bosco), of his religious order.
The letters SDB after Father Sajdak's name stand for "Society of Don Bosco." The Italian Don Bosco chose St. Francis de Sales as the patron of the congregation he founded, now one of the largest in the world, so its members are often called Salesians.
In the morning Father Sajdak discussed "Holiness is Happiness," and how we are all called to be holy. His afternoon talk, on "Don Bosco's Way to Youth Holiness," discussed how the saint used his talents to make the youth recognize their talents and use them for God's work.
After each session the youth divided into groups for discussions facilitated by members of Youth for Christ (YFC), who also led the day's registration, ice-breaker, and worship activities. Meals were prepared by a group led by Eric Coronado. They not only organized the symposium, but are planning the upcoming activities for the visit of the relics of Don Bosco.
"We are excited about this big event coming to our parish," said Coronado. "Having the youth here knowing more about our Salesian founder is a great way for them to know more about how they can be workers for God, the way Don Bosco was."
Most of the organizing committee are alumni of Don Bosco schools in the Philippines.
"Seeing the Salesians and the YFC working together in this effort is a wonderful testament to God's power of moving the youth to do his work. This is truly amazing," said Father Sajdak. "We hope to see more of these gatherings in the future."
Don Bosco's relics will be at Our Lady of Good Counsel Parish in Surrey from Oct. 8 to 10. The relics will then move on to 17 other countries in East Asia.
Posted by Padre Steve at 7:57 AM 1 comment: 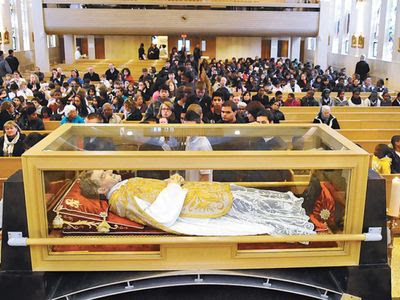 The following comes from the InsideToronto site:

Local students were in the presence of a saint recently.

A wax replica of the patron of youth, a Catholic priest who dedicated his life to educating young people, is encased in an urn made of a glass box atop a wood and metal cart. It was trucked into the city from Chicago the night before, and a crane was needed to get the more than 800-kilogram urn into the church.

"With the help of the Knights of Columbus we were able to lift it into the sanctuary," said Father George Harkins, director of the Salesian Community of Toronto, who was at the church Oct. 5 to greet visitors.

While Bosco's body mostly disintegrated from contact with the air when his tomb was opened in 1929 in preparation for him to become a saint, the bones survived, with most of the skeleton in Turin, Italy, explained Harkins. "Not everyone can go to Turin, so we'll send Don (an Italian term of respect) Bosco to the people," he said.

The bones and tissues of the saint's right hand and arm are within the replica.

Schools were invited to see the relic throughout the day, with a mass in honour of Bosco scheduled later that evening.

During the visit students delivered 'petitions' to the saint; for Bosco to pray for their families, to give hope to children fighting for freedom, and for just being a good role model.

The relic has already travelled through South America, Central America, and the U.S., noted Harkins. "But certain cities were chosen, they couldn't choose every city," he explained. "Financially, each place (that receives the relic) has to pay ... to make the pilgrimage a success. So we take care of it at a local level."

Susan Almonte, a teacher with Mary, Mother of God school in Parkdale, called the event a "once-in-a-lifetime" chance for those in attendance.

"We have a real devotion to St. John Bosco," she said. "Our teachers are trained in his philosophy of education."

Harkins confirmed the relic would only be at the church for one day on its worldwide pilgrimage. The following day it was headed to Montreal, then to Surrey, British Columbia, then to Asia, he said.

Lourdes Narciso, a Grade 8 student at Holy Child Catholic School in north Etobicoke, was impressed by the replica.

"I think it was really great to see a saint and a relic, it looked real," she said, noting her school had prepared for the day.

The relic's journey began on Jan. 31, 2009, the 150th anniversary of the founding of the Salesian Congregation. "It prepares us for the 2015 celebration of the 200th Anniversary of Don Bosco's birth near Turin, Italy on Aug. 16, 1815," reads the official website of the pilgrimage, donboscoamongus.org
Posted by Padre Steve at 7:51 PM 1 comment: 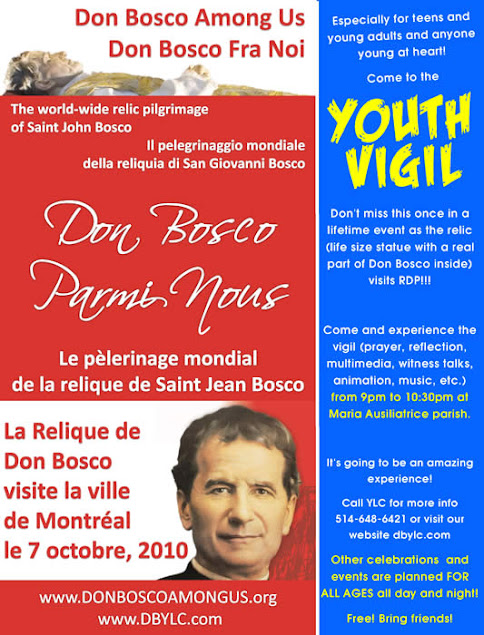 Posted by Padre Steve at 7:00 AM No comments:

Don Bosco's Relic is Coming to Us!

Blessing of the Relic of Don Bosco

Who is St. John Bosco?

Don Bosco Among Us: Celebrate!

Where is Don Bosco now?

Padre Steve
Welcome to the Blog! I am a Catholic Priest and was ordained to the priesthood on August 26, 2000. I hope this site is a place of interest for you where you will find ideas and information on the Catholic faith and the Church.